Trusted Execution Environments (TEEs) allow organizations to run applications within a set of memory pages that are encrypted with a secret key by the host CPU in such a way that these pages are not accessible to the operating system or any other software, even running at the highest privilege level.

There are currently two leading models of TEEs:

Applications that need to run in a TEE must be developed specifically for each platform, and they differ significantly depending if it’s a process-based or VM-based TEE model. Additionally, they must implement something called attestation, which is a validation process for the TEE to prove that it’s genuine before it can be trusted by the application. Rewriting the application or the custom VMM that runs it, as well as the attestation, for each hardware platform is extremely complex and time-consuming.

In the next section, we will introduce Enarx, an open source framework for running applications in TEEs that addresses many of the issues raised. We’ll give a simplified overview of the component architecture of Enarx (and how it allows for support for multiple hardware platforms) and the process of creating and deploying applications to TEE instances using Enarx.

Enarx aims to minimize the trust relationships required when executing applications, meaning that the only components which need to be trusted are: the CPU and associated firmware, the workload itself, and the Enarx middleware, which is fully open source and auditable. Applications run without any of the layers in the stack (e.g. hypervisor, kernel, user-space) being able to look into or alter the Keep or its contents.

It provides a WebAssembly runtime, based on wasmtime, offering developers a wide range of language choices for implementation, including Rust, C, C++, C#, Go, Java, Python and Haskell. It is designed to work across silicon architectures transparently to the user so that the application can run equally simple on Intel platforms (SGX or the recently-announced TDX), AMD platforms (SEV) or forthcoming platforms such as Arms’ Realms and IBM’s PEF - all without having to recompile the application code.

Enarx is CPU-architecture independent, enabling the same application code to be deployed across multiple targets, abstracting issues such as cross-compilation and differing attestation mechanisms between hardware vendors.

Enarx provides attestation, packaging and provisioning of the application to take place in a way which is transparent to the user. Every instance of an application goes through three steps:

At no point is the host system able to look inside or change the code or data within a Keep. Thus, Enarx allows organizations with sensitive code or data to run their applications with strong integrity and confidentiality protections. 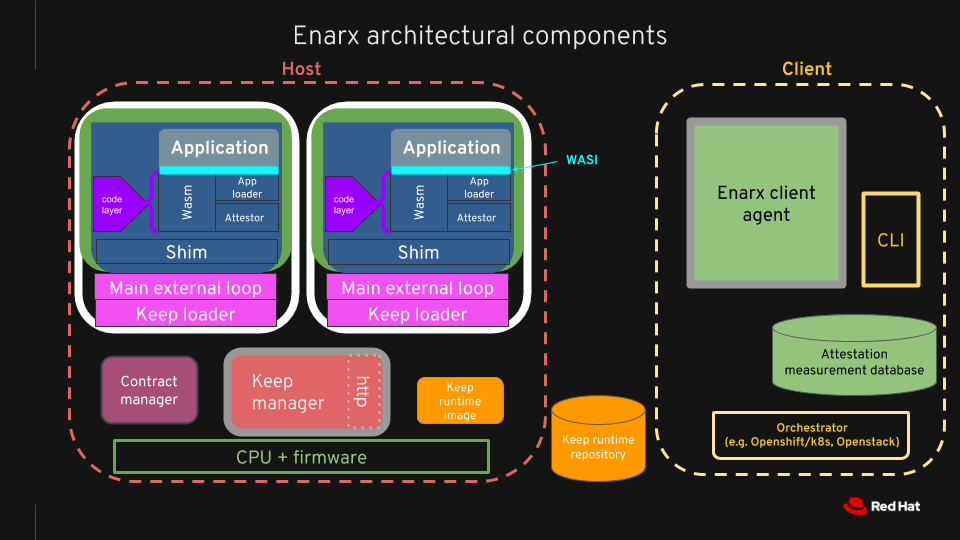 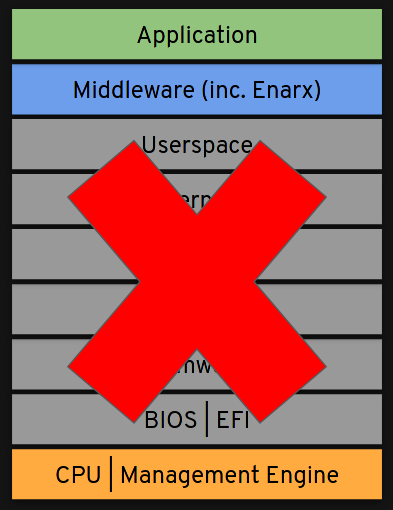 Enarx provides four layers in the run-time stack. Working from the lowest up, they are:

An application which is going to run in an Enarx Keep needs to attest two things:

(??? what is Red Hat in this case? the abstract cloud provider? is "requests from Enarx" like request from a local library, or actually hitting an API??)

From the client’s point of view, the attestation steps of Enarx end up with the following two cryptographically validated assertions:

This protocol allows a tenant to:

This protocol maps the regular SEV launch procedure onto a simple client-server model (client sends request to server; server sends its response to client). In fact, the message formats are comprised of data structures defined in the AMD SEV specification.

It is a short, serialized exchange. More importantly, however, it is meant to be an “atomic” transaction. What this means is that the client and the backend complete attestation successfully in this exchange or they don’t. There are no “in-between” end conditions. Therefore, neither party should have any expectation of “retrying” a previous step. It is always forward progress or none at all. As the orchestrator, it is the Keep Manager’s responsibility to know if the keep becomes defunct during attestation, launch, or normal operation. It is expected that the Keep Manager will inform the client of an appropriate error condition and tear down the defunct Keep if necessary.

The data structures defined in the SEV specification form the substrate for this protocol. As a result, message payloads are binary structures. The messages for this protocol are CBOR-encoded. They will be represented here in Concise Data Definition Language (CDDL).

Enarx needs to support Keeps that are built on encrypted virtual machine technologies such as AMD SEV and IBM Power PEF. This means that we need to boot an operating system inside the guest VM. However, existing operating systems do not meet the Enarx design principles (especially: minimal trusted computing base [TCB], external network stack and memory safety). Therefore, this page outlines a plan for building a minimal OS which intends to service only the minimal requirements to run Enarx.

A traditional virtualization stack (such as Qemu + Linux) is typically composed of four components:

In order to remove these problems, Enarx plans to produce three components when running in a VM-based TEE:

In order to keep the TCB small, especially the exclusion of a full network stack, we intend to proxy syscalls to the host. This allows us to use as many of the host resources as possible while maintaining a small Keep size. It also allows for performance optimizations as Enarx gets more mature. The above chart shows a full trace of a single syscall across the various components. This works as follows:

Syscall Categories and their Layers #

Why not do containers? #

Would it be possible to implement containers within TEEs? That depends somewhat on the TEE implementation, but the answer is a "kind of yes". However, when you run containers on a host, the interactions that the container runtime has with the host leak all sorts of information that we really don't want to be making available to it. One of the design goals of Enarx is to reduce the number of layers that you need to trust, so this isn't a great fit. We know that containers are great, and one of the interesting sets of questions around Enarx revolves around exactly how you orchestrate Keeps, but whatever that looks like, we won't be doing something which meets the specification for containers, for the reasons outlined above.

(wish they were a bit more specific about this)

The short answer is yes, where possible. To expand on this, first of all this is only a goal for now, as we won't be focusing our efforts on it immediately given we are still working on core functionality. Secondly, it is likely to be impossible to mitigate all side-channel attacks, but we certainly will attempt to do so where possible, as part of our aim to make Enarx Keeps as secure as possible.

You could implement many of the capabilities of a TPM within a TEE, but it doesn't make sense to create a "full" TPM implementation within a TEE on two levels:

HSM's provide higher levels of protection than TEEs, but are separate modules, accessed via PCI bus, network, etc. TEEs are integral to the CPU packages on a motherboard. Both HSMs and TEE instances can be used as general-function processing units (depending on the model), and both can be programmed for particular uses (e.g. PKCS#11 modules). The cost of HSMs is high (typically thousands of dollars), whereas TEEs are integral to a chipset. The work to program an HSM is difficult.